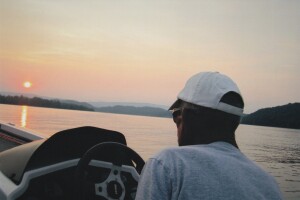 Joseph "Joey" Chadwick, a lifelong resident of Coalfield, TN, passed away on Wednesday, July 13th. He was the son of the late Mitchell and Marjorie (Wood) Chadwick. In his last years, he was best known for his skilled woodwork, but he will also be remembered for much more. It is hard to put into words how talented he truly was.

Joey graduated from Coalfield high school in 1969 and was an avid Jackets' fan for life. In his youth, he was a strong athlete and well-rounded student. He played all sports and continued to play softball in church leagues as a young man. He was described as "so cool" in his younger years. He was confident, a sharp dresser, handsome, and hard working. If he was going to do it, he worked hard to get it right.

So many knew him for his love of fishing.  Most of his leisure time during his adult life was spent on a lake somewhere. He spent countless hours checking out the best spots on the lake, making his own lures, or whatever else it took to be competitive in the sport. He wanted the fastest boat and the latest and greatest tackle or equipment. The fishing community knew him well. He could spot a friend across the lake by the color of their boat or the type of motor on the back. Fishing was truly one of his greatest passions. There are so many stories that we hear about his skills and competitiveness, how he helped someone diagnose and fix a problem with their motor, or how he either thrilled them or nearly scared them to death when he sped off down the lake.

He was also passionate about sports. He enjoyed competing in his prime and always followed his favorite teams or racers. You could almost always get a play by play from him on Coalfield or TN Vols' games. There was no doubt that his blood ran orange.

He could be tough, but also had a very tender heart. Babies loved him and he loved the babies. It was hard to come by someone who had such a variety of knowledge and skills. He could diagnose the problem with your boat motor (and most likely fix it). He could lay the block for your home foundation or build the whole thing. He could build cabinets, doors, dining tables and more. He was always busy with something and despised the thought of being considered lazy. Even in the late stages of his illness, when he had every reason to lie down, he just wouldn't do it.

He is survived by his siblings Wallace Chadwick, Timmy Chadwick, and Angela Duncan. One of his greatest contributions and achievements was raising four hard-working and capable children. He will be greatly missed by Gary (Michelle) Chadwick, Jeremy (Leeanne) Chadwick, Ashley Bracher, and Andrea (Josh) Holbert. He was very proud to be "Papaw Joey" to Layne, Baylee, Bo, and Lorelei. He leaves behind many other close relatives and special friends.

The family will celebrate his life with a remembrance service at Jackson Funeral Services in Oliver Springs, TN. It will be held on Saturday, July 16th from 1 to 3pm. In lieu of flowers, please help those in need by making a donation to either your local Shriner's, an organization that supports those suffering from vision loss or blindness, or find a way to support your local community. He never hesitated to donate whether it was a fundraiser for a local sports team or just helping a friend or neighbor.

To leave a note for Joey’s family or to share a memory, please go to our online guestbook at jacksonfuneralservices.com

To send flowers to the family or plant a tree in memory of Joseph (Joey) Herbert Chadwick, please visit our floral store.

A Memorial Tree was planted for Joseph (Joey)

Join in honoring their life - plant a memorial tree